you might remember the quadratic formula from middle school, and for similarly low-degree polynomial functions, various analytical methods are at your disposal.

However, for higher-degree polynomials (five or higher) where there are no general analytic solutions or for complicated functions (or sets of functions), it is often necessary or easier to resort to numeric methods – this is where root-finding algorithms come in.

Root-finding algorithms share a very straightforward and intuitive approach to approximating roots. The general structure goes something like: a) start with an initial guess, b) calculate the result of the guess, c) update the guess based on the result and some further conditions, d) repeat until you’re satisfied with the result. 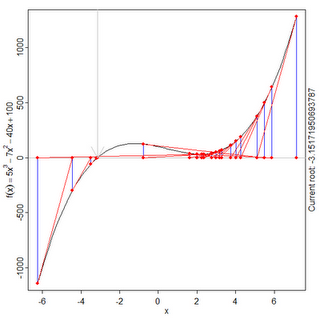 For example, how would you go about calculating the square root of 20 by hand? You’d begin with something like 4.5 (you have the luxury of knowing what a good first guess is – this is not always the case), square it to get 20.25, reduce 4.5 by some small amount since the result is greater than 20, recalculate, etc. until you get an answer you’re satisfied with. Our naive root-finding algorithm looks something like this:

Not bad – we approximated one root of our function to the desired specificity. We’ve essentially re-invented a line-search method:

where each guess is a function of the previous guess, plus some step size

But there are a few unsatisfactory things about the algorithm. First, if you run the algorithm with a tolerance of .001 (precision down to one more decimal place) you’ll find that execution never completes. This is because our step size is too large: at some point f(x-guess) bounces back and forth over the “true” root between a guess that’s too small and a guess that’s too large, both of which are greater than the absolute value of our tolerance. So we need to be careful about the balance between the step size and our tolerance, and we’d likely need to set a limit on the maximum number of iterations in our loop to halt the program should this occur again.

The second related problem has to do with our step size. If we had started with an initial guess of 5 instead of 4.5, we would have to do 527 iterations instead of 27 iterations in order to find a root. Surely the step size could be improved by taking into account just how far we are from the root; for example, we might factor in something like

so that guesses farther away from the root receive quadratically larger step sizes than those closer to the root. Notice that this would help with our first problem in that guesses very close to the root would have a small step size, decreasing the chance that we jump back and forth over the root because our step size is too large for our given tolerance.

While factoring the squared error into our step size doesn’t work very well in practice, this fundamental idea of finding new ways to optimize step size (and direction) is the foundation for the root-finding algorithms that follow. Having developed an intuition for the naive method of root finding, remaining algorithms are variations on a theme.

Note that the update rule:

As we can see, this method takes far fewer iterations than the Bisection Method, and returns an estimate far more accurate than our imposed tolerance (Python gives the square root of 20 as 4.47213595499958).

The drawback with Newton’s Method is that we need to compute the derivative at each iteration. While it wasn’t a big deal for our toy problem, computing gradients and higher order derivatives for large, complex systems of equations can be very expensive. So while Newton’s Method may find a root in fewer iterations than Algorithm B, if each of those iterations takes ten times as long as iterations in Algorithm B then we have a problem. To remedy this, let’s look at some Quasi-Newtonian methods

The idea of the Quasi-Newtonian Secant Method and other Quasi-Newtonian methods is to substitute the expensive calculation of the derivative/Jacobian/Hessian at each step with an inexpensive but good-enough approximation. All of the more popular methods (BFGS, Secant, Broyden, etc.) have the same basic form, save for different rules about how best to approximate the gradient and update the guess.

You can think of the Secant Method as derivative-lite. Instead of computing the derivative, we approximate it using two points (x0, f(x0)) and (x1, f(x1)), calculate where the line intercepts the x-axis, and use that as one of our new points. This provides a fast way to generate a line that should approximate the tangent line to the function somewhere between these two points

Given our two initial guesses

, the secant line in slope-intercept form is:

Setting y to 0 (our new guess is where the line intercepts the x-axis), we get:

This method is similar to the secant method but instead is initialized with three points, interpolates a polynomial curve based on those points, calculates where the curve intercepts the x-axis and uses this point as the new guess in the next iteration.

The quadratic interpolation method is the Lagrange polynomial:

is carried out with three points to get a second degree polynomial curve. Basically, in this instance we create three basic

degree two polynomial curves, where each curve is zero when m != j and approximates the f(m) value otherwise. The Lagrange polynomial is designed to do exactly this. You get three curves that each pass through one of the points to be interpolated and is zero at all other points, then take the linear combination of those curves for an interpolation that passes through all desired points. Here’s an example of a third degree polynomial interpolation:

Which should I use?

How should we evaluate these algorithms? In general, we need to care about an algorithm’s:

Quotient convergence is defined in terms of the ratio of successive error terms, or how much the error decreases per iteration. If

is the true root and

, and is said to converge with rate k if:

where C is finite and positive. Now, if:

In other words, does the algorithm get better at a constant rate, a quadratic rate, or something inbetween?

I won’t go into great detail about the respective performance of each algorithm, but will give some general guidelines that should help you gain an intuition about which perform best under which conditions.