Which emotions do politicians most frequently appeal to?

I recently saw a BuzzFeed presentation on, among other things, the virality of BuzzFeed content. A big part of their business relies on understanding what kind of content goes viral and why, so their data science team understandably spends a lot of time not only looking at how a piece of content becomes widely popular, but also looking at the distribution of content types in their most popular pieces of content. If you’re familiar with BuzzFeed, the results are probably in line with your expectations. Happiness and humor account for a very large proportion of viral posts. So do posts that shock, posts that try to draw an association between a part of your individual personality and a larger community, etc.

This got me thinking about the distribution of content type for political content. Happiness and humor, which is the most popular content type for a company like BuzzFeed, is pretty much excluded in the political domain. Jeb Bush or Hillary Clinton can’t post cat videos or crack jokes on a regular basis; they have to operate within a narrower specturm of messages: serious, fearful, angry, hopeful , charismatic, etc.

The question is this: what is the distribution of emotions for political content? And what kinds of messages resound with people the most?

Which emotions resonate most with Trump Twitter followers, and how do Trump’s messages differ from his staffers’ messages?

The question for me is: how is message popularity affected by Trump vs. his staffers?

NLP tools for analyzing and categorizing the emotional content of text aren’t too common. Most do not extend beyond classification of positive, negative, and neutral, whereas we are looking for a wider range of emotions. There are a few academic research papers which found moderate success with classification of emotions using relatively full-bodied models (combining lexicon, syntax, etc.), although the code was not provided.

I settled on using Saif Mohammad’s [NRC emotion lexicon[(http://saifmohammad.com/WebPages/NRC-Emotion-Lexicon.htm), which contains a dictionary of words with their associated emotions as judged by Mechanical Turkers (if I recall correctly). If interested, his site has some good resources to help gain an understanding of this sub-field.

More recently I’ve discovered IBM’s Alchemy Language API which, based on the demo, does a great job of analyzing emotional content in text. If I have time to refine my model, I’ll take a look at incorporating this.

Here are some visualizations looking at Trump vs. staffer content characteristics. 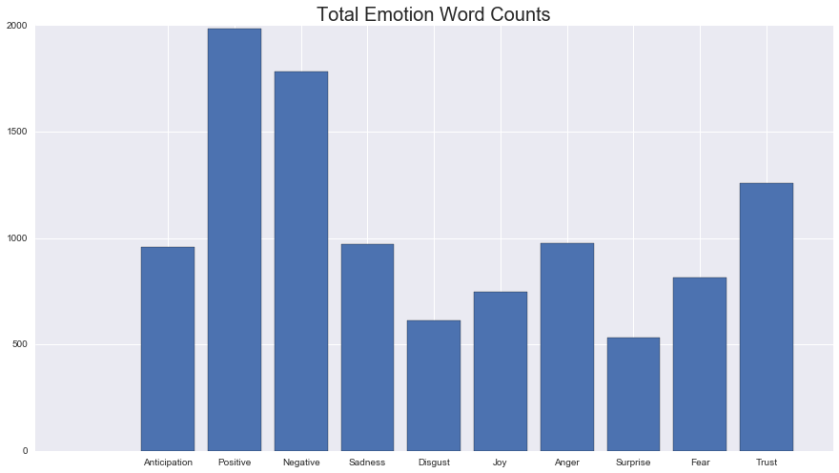 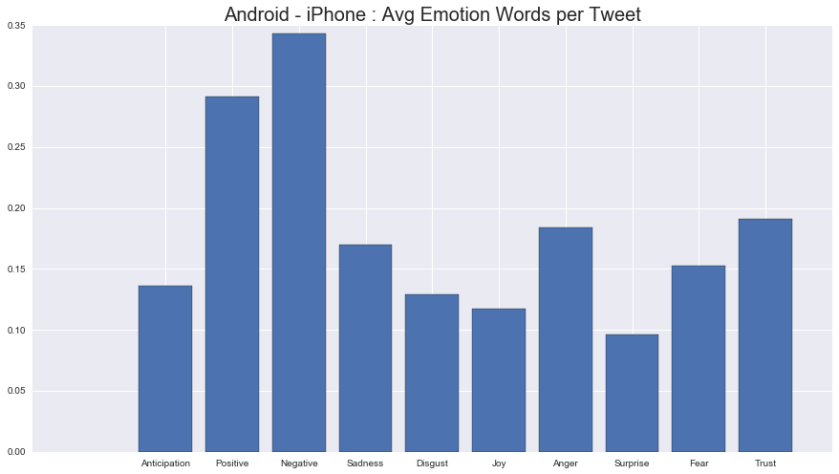 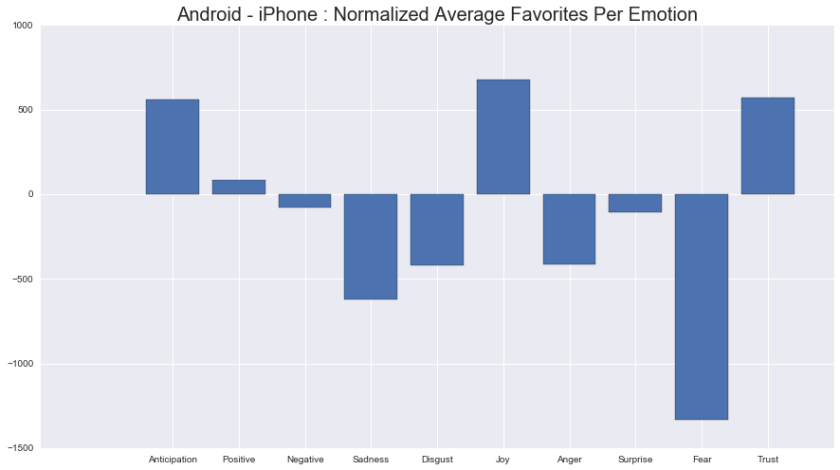 We subtract the mean number of favorites for each phone from each phone dictionary: this gives us a good picture of the differences between the two phones , which otherwise skew all emotions towards Android because each Android tweet gets more favorites on average.

The result is that, surprisingly, Trump was better at garnering favorites with anticipation, positivity, joy, and trust, while staffers garnered favorites for all other categories.